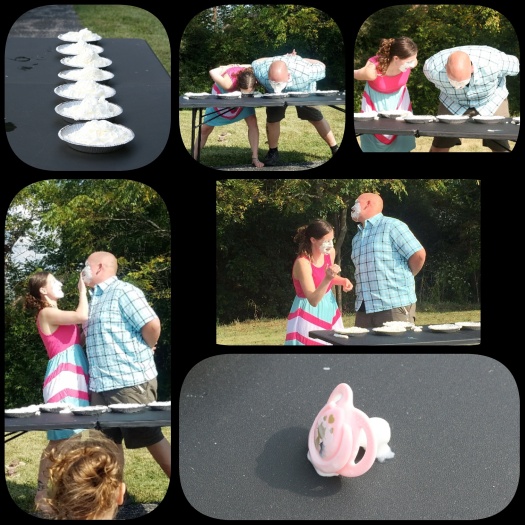 First off, we had our gender reveal party. As you can see from the above picture for our last baby we are being blessed with our third girl. As you can also see we had a lot of fun with the gender reveal and the party went great. 🙂 I’m so happy that our idea worked and we were able to dig through whipped cream with our faces in the beautiful sunshine to find the pink or blue pacifier. No one knew the gender except the two people we had open the envelope minutes before to put the blue or pink pacifier in the pie pan of their choosing and cover it with whipped cream. No one also knew, except my husband and I, how we had planned to present the reveal. Everyone was laughing and so surprised and excited when we had them come out to all the whipped creamed pies lined up in a row. It definitely worked out better than I thought it would.  My husband is the one who found the pacifier, but I was the one who got to wipe it off and tell the crowd the gender with it still in his mouth.

The next picture I have posted is me at 14 weeks with my second child on the left and me at 14 weeks with my third child on the right. It looks like working out with weights and programs on top of running and biking instead of just running like I was doing in my last pregnancy is definitely making a difference. Even though my abs and four pack I had are slowly going away, I’m keeping my figure longer. The baby is continuing to grow at to me what feels like a fast rate. Every day the movements are stronger and now my husband can even find her right away with his hand and feel her movements without as much effort as he had to put in before. I’m interested to see if the difference will keep progressing. Happily I am still having more energy than I did in my first trimester so the work outs are not as hard as they were a couple weeks ago. I’m also excited that in less than two weeks we are having an elective ultrasound and get to see the baby and how much she has grown.

Click this text to be brought to my newsletter page.